Well, for a couple of weeks now, we have been in the season of Lent – the six weeks leading up to Easter. On February 13th we celebrated Shrove Tuesday (Pancake Tuesday) followed by Ash Wednesday, which begins the Lenten season.

Let’s top up our coffees and I will share why…

For it is by grace you have been saved, through faith—and this is not from yourselves, it is the gift of God— not by works, so that no one can boast. Ephesians 2:8-9

When one of the Pharisees invited Jesus to have dinner with him, he went to the Pharisee’s house and reclined at the table. A woman in that town who lived a sinful life learned that Jesus was eating at the Pharisee’s house, so she came there with an alabaster jar of perfume. As she stood behind him at his feet weeping, she began to wet his feet with her tears. Then she wiped them with her hair, kissed them and poured perfume on them.

When the Pharisee who had invited him saw this, he said to himself, “If this man were a prophet, he would know who is touching him and what kind of woman she is—that she is a sinner.”

Jesus answered him, “Simon, I have something to tell you.”

“Two people owed money to a certain moneylender. One owed him five hundred denarii, and the other fifty. Neither of them had the money to pay him back, so he forgave the debts of both. Now which of them will love him more?”

Simon replied, “I suppose the one who had the bigger debt forgiven.”

“You have judged correctly,” Jesus said.

Then he turned toward the woman and said to Simon, “Do you see this woman? I came into your house. You did not give me any water for my feet, but she wet my feet with her tears and wiped them with her hair. You did not give me a kiss, but this woman, from the time I entered, has not stopped kissing my feet. You did not put oil on my head, but she has poured perfume on my feet. Therefore, I tell you, her many sins have been forgiven—as her great love has shown. But whoever has been forgiven little loves little.”

Then Jesus said to her, “Your sins are forgiven.”

The other guests began to say among themselves, “Who is this who even forgives sins?”

I love Lent. I love Lenten hymns. I love the time of solemn reflection. I love pondering the depth of Christ’s sacrifice just because of His deep love for me, for you! It’s a time of reverent reflection on the greatest love story of which I am, you are, the beloved! It’s a time when I imagine being the woman in the above story from Luke 7. It’s also a time where I consider sacrificing something in my life in order to experience – vaguely- the sacrifice that Christ made on my behalf; not because I have to do it, but because, for me, it is part of my friendship, offering, worship and thanksgiving back to the Lord.

Please don’t misunderstand. I don’t do very well. In fact, most years I don’t make it past a week. One year I decided to remove sugar from my coffee for Lent. Upon final reflection, I realized I had simply replaced the one little teaspoon of sugar that I normally would have with a whole sweet of some sort – donut, square, muffin. How pathetic am I! Another year, unknown to anyone else, I decided to remove the word ‘no’ from my vocabulary for the season of Lent. At the time, I was a mom of preteens with a full-time job, and felt that I was always saying ‘no’ to the kids; It really is a quick and easy response. Well that Lenten sacrifice went better than the above mentioned one, but let me tell you, I learned a lot of phrases and words that were synonymous to ‘no’. It just took a lot more effort on my part.

The point is that the time spent in private self-sacrifice –no one needs to know- can deepen the depth of appreciation for the massive sacrifice that Christ made for you and me. It has made me personally and intimately aware of how difficult it is to follow through with meaningless tasks. They are minuscule in relation to the task of the cross which our Saviour willingly endured, despite His own desire to ‘remove the cup’. However His love for us was greater, is greater, than the pain of thorns and whips and nails and death. What greater love is there than this? 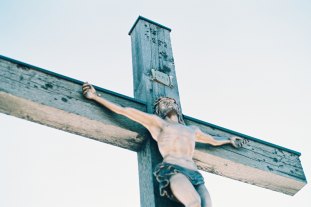 Also, the Lenten sacrifice has shown me the depth of my weakness and inability. Again, His love for us is greater than all the pain and ridicule He willingly endured, and yet my love for sugar in my coffee broke me! Oh what a wretched one am I! On our own, if we are weak and incapable of following through with such meaningless activities, how then can mankind ever have the audacity to think we offer anything towards our own salvation. We are weak. It is only He who is strong. Christ did it all! And because of the depth of this realization, I am in greater awe and thanksgiving for all He has done for me – for us-  because He loves us and desires us to be in His presence for Eternity! 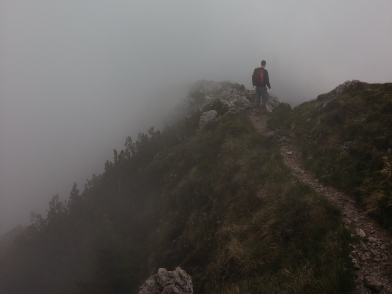 So, perhaps consider sacrificing something for this Lenten season as your personal offering to the Lord. Whether you succeed at it or not, is not the point. It is the journey of yourself that you will personally endure, and a greater depth of all that Christ has done for you because of His great love for you.

Prayer: Dear Lord, You willingly walked to the cross despite the pain and torture that you would endure, knowing it was the road to your death. It pleased you to do so because of your love for me. Please forgive me – a poor wretched, sinful soul. Help me to walk in your love, strengthened to be whom you desire me to be for your glory and the sake of those in my life. In Jesus’ name I pray! AMEN!

Reflection: Have you given yourself a sacrifice this Lenten season, or have you made Lenten sacrifices in the past? Reflect on them. How successful were you? Are/did these actions help draw you closer to the Lord? Explain why or why not? Give thanks for Christ’s willingness to walk the road of the cross because of His love for you. Live in His strength and forgiveness!

This is a text widget. The Text Widget allows you to add text or HTML to your sidebar. You can use a text widget to display text, links, images, HTML, or a combination of these. Edit them in the Widget section of the Customizer.